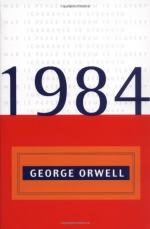 Get 1984 Study Notes from Amazon.com
View the Study Pack
View the Lesson Plans

§ After the war, the shifting of alliances among superpowers was a prominent issue.

§ Collectively, theses events encompassed Orwell's fear that these almighty powers could go to the ultimate extreme and unite to suppress the rest of humanity.

§ Orwell does not target any political regimes (Communist, Fascist, Liberal etc) specifically, rather warns against the underlying, fundamental element of all regimes - power and the potential threat this poses to humanity.

§ Concentrated in the hands of an elite few, power potentially has alarming repercussions for ordinary people as revealed in the novel which alludes to elements of notoriously cruel regimes such as those of Hitler and Stalin.

§ Techniques of totalitarian rule are comprehensive and sinister. 4 main ministries of Ingsoc (English socialism) dominate London skyline and include the Ministry of Truth...