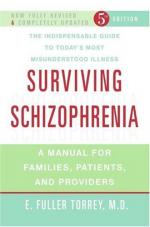 Get Schizophrenia from Amazon.com
View the Study Pack

This student essay consists of approximately 2 pages of analysis of Schizophrenia.

Summary: Types of schizophrenia and it possible causes and cures.
Schizophrenia- Mental disorder involving deterioration of, confusion about personality.

If you have at least two of the following symptoms, for at least one month then you are suffering from Schizophrenia:

Disorganized schizophrenia- a person is often incoherent but may not have delusions.

Residual schizophrenia- a person is no longer delusion or hallucinating, but has no motivation or interest in life. These symptoms can be most devastating.

Paranoid schizophrenia- a person feels extremely suspicious, persecuted, grandiose, or experiences a combination of these emotions.

It is essentially unknown what causes schizophrenia. Significant changes in the usage of the brains frontal and parietal lobes have been associated with schizophrenia.

Some people believe that if there is a virus in the pregnant woman, it may damage the fetus' brain. Making the child's future more exposed to mental illness.

A lot of people feel it's purely genetic, and others think something in the environment helps it to develop.

Risk factors for schizophrenia include the following:

Twins and adoption studies suggest that genetics play a major role in the transmission of schizophrenia.

There is a lot of evidence to suggest that schizophrenia is genetically transmitted although, genetics do not explain who will get the disorder.

Schizophrenia is not contagious in any way, shape, or form.

More than 2.5 million Americans are affected by schizophrenia, an estimated one in every 100 people.

There are no cures for schizophrenia, but there are many different treatments that you can take. All the treatments are taken from your specific needs. Poor medication is among the leading causes for becoming sick again and rehospitalization for people with schizophrenia

There are very dangerous consequences to stopping medications or altering the dose without the Doctors involvement. 80% of patience go back to being ill in 1 year off medication, 90% in 2 years .20% go back if they stay on medications