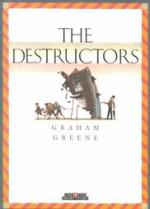 Get The Destructors from Amazon.com
View the Study Pack

Graham Greene
This student essay consists of approximately 4 pages of analysis of The Destructors.

Summary: Discusses the short story " The destructors" by Graham Greene. Analyzes the "characters" from the story.
Characters

A silent, decided, and seemingly frustrated teenager . He speaks nothing more than needed and " yes" or " no" forms most of his answers. He becomes a member of the gang because he wants to take revenge of a society in which his parents have come down. His father, formerly an architect, is working as a clerk ; and his mother considers herself better than the neighbors. This leaves T with nothing better to do than join the local gang. In the destruction of Old Misery's house, he is given the ability to lash out at the world in response to the misfortune it beset onto him.

T is very decided and sees the world as a collection of sayings powered by actions. He tends to destroy Old Misery's house and puts it into action despite the first reluctances and doubts put forward by the gang and specially...

The Destructors from BookRags. (c)2021 BookRags, Inc. All rights reserved.