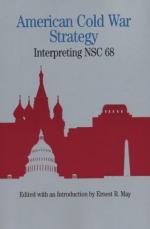 Get NSC 68: A Cold War Policy Paper from Amazon.com
View the Study Pack

This student essay consists of approximately 2 pages of analysis of NSC 68.

Summary: NSC 68 was a Cold War policy paper that examines how to deter the USSR's world domination plans.
Section I

NSC 68 is a document, or policy paper, written in April of 1950 to analyze the courses of action available to the President of the United States in defense to the U.S.S.R. during the ongoing Cold War. This document focuses on the military, economic, political and psychological standpoints of the United States in relationship to the U.S.S.R. NSC 68 was presented to President Truman by his National Security Council. It was primarily written by Paul H. Nitze, appointed by Dean Acheson the Deputy Director of the State Department Policy Planning Staff. Nitze, the Chief of the Policy Planning Staff, was appointed for his experience on the U.S. Strategic Bombing Survey Team, his understanding of governmental strategy, and lastly his immense writing skills. NSC 68 was to analyze the need, or lack there of, for a massive military buildup, an increase in military funding for the armed forces, and authorization for the development of the hydrogen bomb. The purpose of this document, in response to President Truman's request to the National Security Council, was to conduct "a re-examination of our objectives in peace and war and of the effect of these objectives on our strategic plans" (May 4).

NSC 68 is a declaration to the U.S. President stating the inevitable intent of the Soviet Union to take over the free world by its ambition to become the single dominant world power by expanding communism and Soviet authority to non-Soviet area's of the world. Therefore NSC 68 called for immediate action and contained a detailed outline depicting a proposal for drastic changes in the current U.S. foreign policy of containment. Nitze proposed in NSC 68 that the U.S. take a more drastic and aggressive form of foreign policy to safeguard our own nation, as well as safeguard the free world from communist rule. NSC 68 proposed the need for an aggressively larger, and more prepared military, by the means of higher funding to back it's expansion. NSC 68 also proposed the need for the development of the hydrogen bomb for use in case of a nuclear threat.

More summaries and resources for teaching or studying NSC-68.