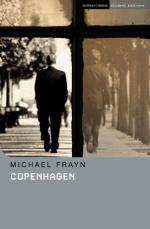 Get Copenhagen from Amazon.com
View the Study Pack
View the Lesson Plans

Michael Frayn
This student essay consists of approximately 3 pages of analysis of Copenhagen.

Summary: Copenhagen incorporates many references to the Shakespearean play Hamlet, therefore the theme of this play is portrayed with more emphasis. An example of this recurring theme is the reference of the ''darkness inside the human soul'' to the news of Jews being shipped from Denmark ''eastwards'', ''to engulf us all'.
HUMA

The play 'Copenhagen' by Michael Frayn, presents an example of the continuing conflict between science and morals. In this play, the morality and the scientific relevance of the atomic bomb is discussed by two major scientists at the time, Niels Bohr and Heisenberg, who consequently helped create the bomb in one way or another. Heisenberg, in this play, visited Bohr for reasons unknown, yet through their discussions it seems as though Heisenberg turned to Bohr for help with his uncertainty about exposing the atomic bomb to Germany. Throughout the play, many questions arise about what it is that motivated the scientists involved in the creation of the bomb to do what they did. One recursive argument, which is also an underlying theme of the play, is the "darkness inside the human soul".

Copenhagen incorporates many references to the Shakespearean play Hamlet, therefore the theme...