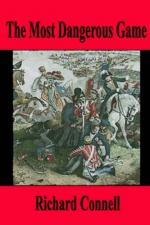 Get The Most Dangerous Game from Amazon.com
View the Study Pack
View the Lesson Plans

The Most Dangerous Game Essay | Essay

Richard Connell
This student essay consists of approximately 2 pages of analysis of The Most Dangerous Game.

The Most Dangerous Game

Characterization is an important device used in this story, as it provides insight into the way characters are presented. For example, General Zaroff's physical appearance: "He was a tall man past middle age, for his hair was a vivid white, but his thick eyebrows and pointed military mustache were as black as the night from which Rainsford had come. His eyes too, were black and very bright. He had high cheek bones, a sharp cut nose, a spare, dark face, the face of a man used to giving orders the face of an aristocrat." He was a sophisticated man, yet he was manipulative, arrogant, and cold hearted. When his servant Ivan died, he was aggravated that he would have to replace him. "Two slight annoyances kept him from perfect enjoyment. One was the thought that it would be hard to replace Ivan."

The conflict in this story is shown in many different forms. The internal conflict is man vs. self. When Rainsford was being hunted in the jungle he had to use all his physical and mental abilities to try and outsmart General Zaroff. The external conflicts are man vs. man, hunter vs. hunter, and predator vs. prey. Though there are many conflicts in this story, the main one is man vs. man.

With the use of these and other literary devices, Richard Connell created the story for which he is best known, The Most Dangerous Game.

More summaries and resources for teaching or studying The Most Dangerous Game.

The Most Dangerous Game from BookRags. (c)2022 BookRags, Inc. All rights reserved.