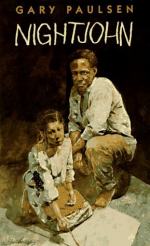 Gary Paulsen
This student essay consists of approximately 2 pages of analysis of Nightjohn.

Pualsen talks more about the blacks. Burnett talks about the whites mostly. The book explains more about slavery. The movie makes slavery appear very easygoing and mild. When the book makes it appear very real and how slavery actually was.

When the two slaves have escaped Waller comes into the church and threatens to shoot all of the slaves. In the book they weren't even allowed to pray. That I think wasn't very good on the play director because they weren't allowed to do anything religious in the book.

More summaries and resources for teaching or studying Nightjohn.