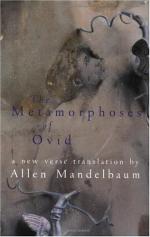 Summary: Ovid uses metamorphosis in his epic "Metamorphoses" to explain the creation and existence of many common creatures, plants, and other things in the natural and supernatural worlds. A focus in this essay is that people are plants, metaphorically, and that Apollo acts as the gardener. Each of the transformations that the characters underwent are fitting, proper, and have a more profound implication and motive than simply transformation from one form to another.
Apollo's Human Gardening in Ovid's Metamorphoses

In Ovid's epic poem Metamorphoses, he uses many transformations of humanoids to explain the existence of many natural entities such as animals, plants, rivers, and so forth. Ovid uses the Roman gods to be the active agents in many of the metamorphoses, although some of them are caused simply by the will of the being. In the Melville translation of Metamorphoses, the stories "The Sun in Love" (book IV, ln226-284) and "Hyacinth" (book X, ln170-239) have occurrences of both agencies of transformation of people into plants. Apollo is the catalyst that causes the metamorphoses in each of the stories. The metamorphoses involved support the concepts of the "Great Chain of Being" and the metaphor "People are Plants" expressed in the book More than Cool Reason by George Lakoff and Mark Turner due to the aspects involved in the Ovidian metaphors...