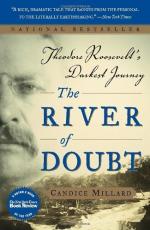 Get The Modern Presidency:an Evolution from Amazon.com
View the Study Pack

This student essay consists of approximately 14 pages of analysis of The Modern Presidency:an Evolution.

Summary: The growth of the modern presidency actually began with the presidency of Theodore Roosevelt. He was the first president who saw that the office of the presidency was a "bully pulpit" by which when he did not get his way with Congress he could take his case to the people. This was one of the first times that a president saw that his role could be active and that he was able to take charge of the power at his disposal.
The Modern Presidency: