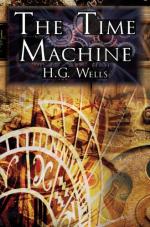 Get Literary Devices in "The Time Machine" from Amazon.com
View the Study Pack
View the Lesson Plans

H. G. Wells
This student essay consists of approximately 1 page of analysis of Literary Devices in "The Time Machine".

Literary Devices in "The Time Machine"

Summary: H.G. Wells's use of literary devices in the novel, "The Time Machine"
In H.G. Wells's The Time Machine, Wells using a lot of description. This becomes very apparent, even in the beginning of the novel. "His grey eyes shone and twinkled, and his usually pale face was flushed and animated." and ."..said Filby, an agumentative person with red hair." Both of these quotes help to bring the characters alive and give off a certain personality trait that could be used throughout the entire book.

Another literary device that is used throughout the book is when the author refers to a character but doesn't give him a true name, rather just an adjective. This is shown by the character given the name of the "Medicine Man." This is to show that while they are import to the development of the story, they are not important themselves except for the main roles that they play, like the Medicine Man, or the Journalist, or the Psychologist.

In medias res is another literary device that H.G. Wells uses. I think that this device really helps to bring you into the story. It also helps to show how a character acts before really meeting him. I also think by doing this it makes you kind of included in the story as well as a way to capture the ready and make them want to read more. When a reader starts a book and they start in medias res it makes the reader want to figure out what they were talking about and by that point the author has captivated the reader.

More summaries and resources for teaching or studying The Time Machine.