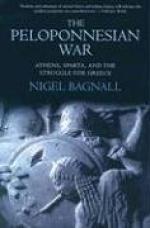 Get Why Athens was Better Than Sparta from Amazon.com
View the Study Pack

This student essay consists of approximately 2 pages of analysis of Why Athens was Better Than Sparta.

Why Athens was Better Than Sparta

Summary: Personal opinion about why Athens was better than Sparta in ancient Greece with a comparison of the two city-states.
If I had to choose which one was better, Athens or Sparta, I would say Athens. I would pick Athens because the Athenian boys and girls were treated better than in Sparta and they also got education, the people in Athens favored people and Athens had an assembly and the council of five hundred.

The children in Athens were treated better than the children in Sparta. I say this because in Sparta if the baby was not healthy, they were not allowed to live or had to be a slave. In Athens, the boys went to school from the age of 6 to 14. They either went to a private or a primary school. They learned the poems by Homer and were taught how to play a lyre. They always had a man teacher. After that, they went to a higher school for 4 years and after they turned 18, they had to go to a military school for 2 more years. When they were 20 years old, they graduated. The girls couldn't go to school but they still were taught to read and write at home.

Athens favored people. Unlike Sparta, either a king or an oligarchy did not rule Athens. They had their own constitution and their own government. The Athenians were also the first ones who had the democratic constitution. A noble named Cleisthenese wrote this constitution. It was the fist constitution ever written.

There were also these two groups in Athens. One of then was the Assembly and the other one was called The Council of 2 Hundred. The Assembly was open to all men over 20 years old. The Assembly chose 10 generals to run the military and to serve as a judge. One of the chief was called the commander in chief. The council on the other hand was a group with 500 members. They chose the members in an easy lottery way because the people in Athens thought that they were all smart enough to hold an office. And also the rich Athenians had a chance to win over the poor Athenians.

My opinion is that Athens is better than Sparta because the Athenian children got education and were treated better than the Spartan children, the Athens favored people and they had the assembly and the Council of 5 Hundred.

Why Athens was Better Than Sparta from BookRags. (c)2020 BookRags, Inc. All rights reserved.