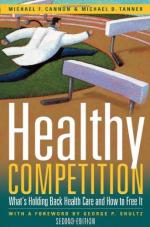 Get Progress Is Better Achieved by Competition Than Cooperation from Amazon.com
View the Study Pack

This student essay consists of approximately 10 pages of analysis of Progress Is Better Achieved by Competition Than Cooperation.

Progress Is Better Achieved by Competition Than Cooperation

Summary: Competition exists when two or more vie for the same thing. Cooperation, on the other hand, involves the formation of alliances to accomplish, or compete for, a shared objective. Therefore, cooperation and competition are often perceived as contrasting terms.
Pains Taken For Progress

Webster defines progress as the onward movement or advance; the gradual steady improvement of human life in a direction that and affects the very fabric of existence, ultimately impacting the social, religious, cultural, economic geopolitical aspects of life. Progress, as a whole, can be seen as a reactive force - a reaction of comparisons to that which previously existed. Progressive, according to Webster, is descriptive of forward movement or advance. Humanity's journey has been that of continuous progression, although subtle at times and not entirely without resistance and opposition. Humanity's progression has been a result of competition and cooperation, either acting independently of the other or in conjunction with one another. When progress is achieved through competition, it is achieved more effectively when cooperation is also present.

Competition exists when two or more vie for the same thing. Cooperation, on the other hand, involves...

More summaries and resources for teaching or studying Competition.

Progress Is Better Achieved by Competition Than Cooperation from BookRags. (c)2021 BookRags, Inc. All rights reserved.