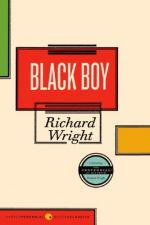 Get Themes in the Novel "Black Boy" from Amazon.com
View the Study Pack
View the Lesson Plans

Richard Wright
This student essay consists of approximately 6 pages of analysis of Themes in the Novel "Black Boy".

Themes in the Novel "Black Boy"

Published in 1945, Richard Wright's autobiographical novel Black Boy was to prove the contrary. It documented prejudice and oppression caused by the Jim Crow laws in the Deep South in the early twentieth century. It is an account of the difficult road of an African American, who was convinced to have greater destiny than that of a stereotypical black person, the white people tried to transform him into.

Wright tells the violent and disturbing story of his own life between the years 1908 and 1934 when he lived in the southern states of Mississippi and Tennessee.

One is struck by the extreme cruelty and hardship he faced while...