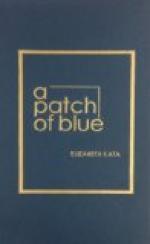 Get Selina's Tolerance in a Patch of Blue from Amazon.com
View the Study Pack

A Patch of Blue Essay | Essay

This student essay consists of approximately 2 pages of analysis of Selina's Tolerance in a Patch of Blue.

Selina's Tolerance in a Patch of Blue

Summary: Discusses the book A Patch of Blue, by Elizabeth Kata. Explores how Selina learns to develop racial tolerance through her relationship with Gordon.
In the world today, some humans are tolerant whereas some are ignorant. However, some of these individuals can transform into a tolerant person even though he or she were not one before. Selina is one of the people who becomes broadminded in the novel A Patch of Blue by Elizabeth Kata. By falling in love with Gordon, Selina alters into an understanding person. The thought that Selina is going to develop in to tolerant individual is expressed throughout this novel, especially after her encounter with Gordon.

Selina does not become tolerant until she meets Gordon, the person whom she falls in love with. Gordon asks Selina to be considerate especially towards colored people. She responds that trying her best may be showing she will do. She dislikes dark-skinned people since she thinks they are like the color black. This dark pigment is Selina's most hateful color since that is the only shade she is able to see. Nevertheless, Selina does become appreciative for colored people when she understands that the most important person in her life is a Negro.

Selina's adjustment to a tolerant person is indicated throughout the novel particularly after she meets Gordon. Practically every event foreshadows this prediction. Selina may not have become easy-going if she is not blind because then she might not have met Gordon, the person who teaches tolerance to her. Selina goes through many difficulties but she does become permissive. This illustrates the point of view in which Elizabeth Kata is trying to show that no matter how painful tolerance is, it is still possible.

More summaries and resources for teaching or studying A Patch of Blue.

Selina's Tolerance in a Patch of Blue from BookRags. (c)2022 BookRags, Inc. All rights reserved.