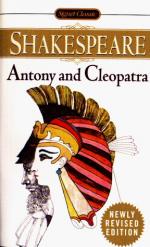 Get To What Extent Does Act Iii Embody All That Is Wrong with Antony? from Amazon.com
View the Study Pack
View the Lesson Plans
Related Topics
The Winter's Tale
Venus and Adonis

William Shakespeare
This student essay consists of approximately 4 pages of analysis of To What Extent Does Act Iii Embody All That Is Wrong with Antony?.

To What Extent Does Act Iii Embody All That Is Wrong with Antony?

Summary: In the play Antony and Cleopatra, Antony's flaw is Cleopatra, his infatuation for her and her control over him. It is through this flaw that we are audience to a side of Antony which is blinkered, immature and lacks rational judgement which inevitably leads to a downfall in his character.
In the majority of Shakespeare's tragedies the protagonist will have a fatal flaw which inevitably leads to their demise. With Antony and Cleopatra being a tragedy this characteristic of a tragedy can be seen here as well. For throughout the play we can see his down fall stemming from his flaw - his fixation with Cleopatra.

To the lead up to Act III we see Shakespeare use the other characters in the play, especially Enobarbus, to describe to the audience how the man Antony once was, `a stag' and a `brave Antony'. But as Philo states at the beginning of the play, to the audience Antony shows himself to simply be `The triple pillar of the world transformed into a strumpet's fool' throughout the play and it is in Act III that this is emphasised.

In Act III we see the lead up to and the war between...

More summaries and resources for teaching or studying Antony and Cleopatra.

To What Extent Does Act Iii Embody All That Is Wrong with Antony? from BookRags. (c)2021 BookRags, Inc. All rights reserved.