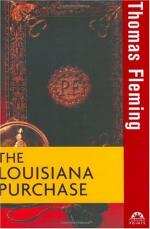 Get The Louisiana Purchase from Amazon.com
View the Study Pack

This student essay consists of approximately 3 pages of analysis of The Louisiana Purchase.

"Let the land rejoice, for you have bought Louisiana for a song."

The purchase of the Louisiana Territory marked a great undertaking in the United States' history. Some key questions that will be answered within this essay will be as follows:

Why was the Louisiana Territory being sold? How was this process undertaken? And finally, what was the benefit of Louisiana becoming a part of the United States? In the following paragraphs these issues will be addressed and resolved, starting from the beginning to the end.

Napoleon Bonaparte (later known as Emperor Napoleon I) saw France becoming a great empire in the New World. He saw the Mississippi Valley as a trade center to Hispaniola, which was the heart of his empire. He first had to regain control of Hispaniola, where power had been seized by...

More summaries and resources for teaching or studying Louisiana Purchase.