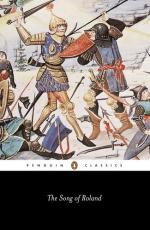 Get The Song of Roland and the Ideal Knight from Amazon.com
View the Study Pack
View the Lesson Plans
Related Topics
A Warning
Becoming Duchess Goldblatt

The Song of Roland Essay | Essay

Anonymous
This student essay consists of approximately 2 pages of analysis of The Song of Roland and the Ideal Knight.

The Song of Roland and the Ideal Knight

Summary: The history of the knight is rich with perception of the character traits considered to be knightly virtues and chivalry. The Song of Roland is an epic about knights and their codes of conduct.
An Ideal Knight

Today there are only a few orders of "knights." These include the Knights of Columbus and Knights of Malta and they represent the ideals and values that knights were supposed to uphold. The idea of a armored knight are closely descended from the equites class of Rome. Knights were closely tied to the various fiefdoms and to the church. They were expected to follow a code of Knightly Virtues. These included: being beautiful in spirit, charity, good cheer, chivalry, courage, courtesy, determination, selflessness, endurance, faithfulness, forgiveness, friendliness, happiness, helpfulness, honor, hopefulness, humility, justice, kindness, loyalty, mercy, morality, nobility, obedience, patience, perseverance, prudence sincerity, sympathy, tenderness, truthfulness, wisdom. Many knights were of course not perfect but in the Song Of Roland Roland, Oliver, Thierry are perfect examples what knights should be.

Roland valiantly tries to fend off the ambush so that Charlemagne will not have to turn back and risk the lives of more troops. Throughout the fight, Roland and his band of knights continually avenge the loss of one of their own. They stay and fight trying to save one another. They show their faithfulness to one another, their loyalty, their sympathy, their nobility, and their selflessness. When Ganelon is on trial Thierry comes to the defense of justice and stands up for what is right and shows his own loyalty to Charlemagne, Roland and the truth. He then proceeds to defeat Pinabel in combat and shows his bravery and righteousness. The Song Of Roland inherently is a epic about the values of knights. The bravery, loyalty, nobility and humility are key characteristics of Roland and his knights.

More summaries and resources for teaching or studying The Song of Roland.

The Song of Roland and the Ideal Knight from BookRags. (c)2022 BookRags, Inc. All rights reserved.