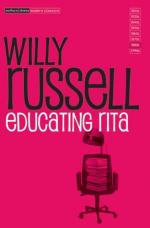 Get Educating Rita - Discuss How Rita Changes Though the Play from Amazon.com
View the Study Pack

This student essay consists of approximately 7 pages of analysis of Educating Rita.

Educating Rita - Discuss How Rita Changes Though the Play

Educating Rita was written in 1985 by Willy Russell. The story is set in one place at a university in the north of England.

Rita and Frank are the Main two characters we see in this play though we hear of many more such as Rita's flatmate Trish who attempts to commit suicide.

Rita is a twenty-six year old working class hairdresser who has made the scary decision of taking a literary course with the open university this means that she had to brake away from the restrictions and the expectations imposed on her by her husband (who wants her to have a baby), family and the community in which she lives and works. Rita has always wanted to be come more educated and culturally aware she calls it "finding herself."

More summaries and resources for teaching or studying Educating Rita.