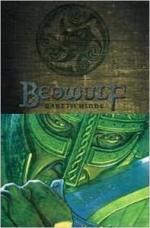 King Hrothgar was not always a gentle lord. He may seem measly because he does not fight the monster. Look closely when Hrothgar says, "I was then in the first flush of kinship, establishing my sway over the rich strongholds of this heroic land (3.465-66)." King Hrothgar first by conquered in war, resulting in the acquirement of money and goods. Then, as he aged, he became a "treasure giver" (4.607), giving "gifts to others" (6.950). He also developed loyalty through friendships, especially felt at the teary & sentimental goodbye when Beowulf left. King Hrothgar follows the ideal set forth in King Sheafson in that he was successful at war and then gained loyalty through friendships & gifts.

Beowulf also exhibits the ideal king because he first is powerful and then (eventually) honorably attains kingship. We witness in detail the phases of kingship with Beowulf. During the first phase of the poem, he is proving himself. He describes stories where he wards off sea monsters and he selflessly fights the two monsters for King Hrothgar. Beowulf evolves as an ideal king by giving gifts to his lord when returning home, always being "ready to fight - it is his way to take care of the wrongs" (7.1384:85), keeping his will, power & respect under control (8.2177), and following the correct order of kingship (instead of overstepping his cousin's right). In the end, Beowulf rules for fifty years and then selflessly decides to fight the dragon alone. Beowulf, throughout the story, follows the phase of kingship: first successful at war, and then as a generous lord.