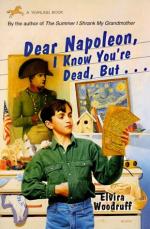 Get Napoleon from Amazon.com
View the Study Pack

This student essay consists of approximately 3 pages of analysis of Napoleon.

Summary: Although Napoleon had tried to create a union of Europe, by using the force of his many military victories, we cannot judge it as a bad idea. We have been trying to create a united Europe since the end of the Second World War.
Napoleon himself has many critics some call him a wicked dictator and others just remember him for the battle of Waterloo, against the British Admiral Nelson. Nevertheless, Napoleon was a very clever man and was the first to come up with the idea of a united Europe, an idea that we are still trying to live by today.

Napoleon had this idea over 200 years before Europe finally became the European Union.

Napoleon's idea for Europe was that the French, Spanish, Italians, and Germans would live together in peace and share laws and trade.

But why did Napoleon want to unite Europe, and was this for a better life for everyone"

Before the French revolution, the laws in France were set by the monarchy and this was the same for most of Europe. At that time, all the areas of France had over 14,000 different laws and so did the...