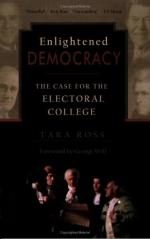 Get The Elective System of America from Amazon.com
View the Study Pack

This student essay consists of approximately 3 pages of analysis of The Elective System of America.

The Elective System of America

Although the american system was governed by the emigrants from Europe, it can not be compared with the european one. In fact there are many differencies between those governmental systems. The main contrast consists of the way the president is elected.

In America the president is elected indirectly by the nation. Americans vote electors, a committee which appoint deputising for the nation the president. This Electoral College system was established in Article II of the Constitution and amended by the 12th Amendment in 1804. When the constitution was established the deligates did not consider the public capable of voting intelligently, due to the bad transfer of information and news. Most people did not know the candidates and it was easier for the public to elect electors whom they can trust and who decided desputising for their voters.

Since the 19th century in the most...

The Elective System of America from BookRags. (c)2021 BookRags, Inc. All rights reserved.