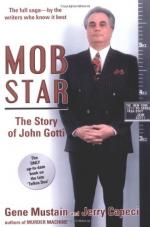 Get John Gotti from Amazon.com
View the Study Pack

This student essay consists of approximately 6 pages of analysis of John Gotti.

Summary: John Joseph Gotti, Jr. was born on October 27, 1940. He was the fifth child of eleven children. By the time Gotti was twelve, he and his brothers Peter and Richard, became involved in illegal street activities for the local mobsters. Gotti eventually quit school at the age of sixteen and joined the Fulton-Rockaway Boys - a teenage gang named after an intersection in Brooklyn. Gotti became the leader of the gang, but unlike other gangs, was not concerned about territory. His gang was mostly into higher levels of criminality that dealt with fencing stolen goods, stealing automobiles and rolled drunks.
Background

John Joseph Gotti, Jr. was born on October 27, 1940. He was the fifth child of eleven children. His parents were John J. Gotti Sr. and Fannie Gotti. John Gotti's father was believed to be a hardworking immigrant from the Neapolitan section of Italy, though Gotti would later describe his father as a New Jersey native who has never set foot in Italy and never worked a day in his life to provide for the family. The Gotti family grew up in the slums of the South Bronx. Although Gotti denies it, his father worked hard to move them out of the poor neighborhoods. John J. Gotti Sr., after much perseverance, later moved his family to the Sheepshead Bay neighborhood. However, after living in Sheepshead Bay for about a year, the Gotti family again moved, and relocated to East New York - an area of Brooklyn where they made...

More summaries and resources for teaching or studying John Gotti.