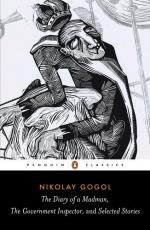 Get An Overview of the Government Inspector from Amazon.com
View the Study Pack
View the Lesson Plans

Nikolai Gogol
This student essay consists of approximately 2 pages of analysis of An Overview of the Government Inspector.

An Overview of the Government Inspector

Summary: Provides a short overview of author Nikolai Gogol's book, The Government Inspector. Includes biographical detail on the Russian author.
Russia's first great author, dramatist and novelist, Nikolai Vasilievich Gogol was born in March, 1809 in Sorochintsi, just outside Ukraine (formerly known as Poltava). His real surname was Ianovskii, but the author's grandfather had taken the name 'Gogol' to claim a noble Cossack ancestry.

In 1831 Gogol met Aleksandr Pushkin, former poet then prose writer, who greatly influenced his choice of fictional style, especially in his Dikinka tales (1831-1832), which were based on Ukrainian folklore.

Gogol's dramatic style is distinctive but is often misunderstood. Gogol blends neoclassicism (simplicity) with various other dramatic genres, as well as a comic blend of absurdity and common sense.

Gogol is also author to many other texts such as Diary of a Madman, The Overcoat and The Nose, but we will only be focussing on one text and that is Gogol's most famous, the classic, The Government Inspector which was written during the repressive regime of Czar Nicholas I in 1836.

The Government Inspector portrays a company of small town officials, led by the chief of police, which mistake a lowly young civil servant from Saint Petersburg, Khlestakov, for a government inspector. When Khlestakov arrives on the scene, he is mistaken for the inspector, and is given a royal treatment that he does not understand, but still takes full advantage of the situation. The townspeople do not discover their mistake until after he is long gone and everything comes crashing down with the final line of the play "the government inspector has arrived." The theme of this play is a classic case of mistaken identity but also a case of a corrupt government system.

Two of the characters in Gogol's masterpiece are Anna Andrevevna, who is the Governor's wife. She is young, has a flirtatious nature and is aware of how she looks and Bobchinsky who is one of the landowners in town. He is short, fat and inquisitive. He wears waistcoats and speaks very rapidly.

The written play was brought to the attention of the Czar Nicholas I, who liked it so much that he insisted on its production. The Government Inspector premiered at the Alexandrinsky Theatre, in Saint Petersburg, in 1836. The Czar, who was among the first to see the play, was said to have commented that the play ridiculed everyone, but most of all himself, but he enjoyed it none the less.

More summaries and resources for teaching or studying The Government Inspector.

An Overview of the Government Inspector from BookRags. (c)2022 BookRags, Inc. All rights reserved.