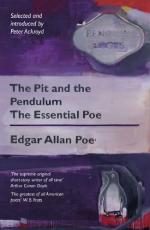 Get "the Pit and the Pendulum" Character Analysis from Amazon.com
View the Study Pack

The Pit and the Pendulum Essay | Essay

Edgar Allan Poe
This student essay consists of approximately 2 pages of analysis of &quot;the Pit and the Pendulum&quot; Character Analysis.

"the Pit and the Pendulum" Character Analysis

Summary: Provides a short analysis of the character in Edgar Allan Poe's "The Pit and the Pendulum." Describes the character's defining traits and explains how these traits affect the storyline.
Many people were tortured during the time of the reformation, when the Catholic Church tried people for going against their beliefs or practicing religions other than Catholicism. During these unjust times scores of people were tried and tortured. Such unforgiving tortures as being starved to death or being burned alive were often implemented. "The pit and the pendulum," a short story written by Edgar Allan Poe tells of an account. In this story, the narrator guides you through the experiences of his unnerving tortures. This account takes place after the court of the church sentences him to death. One must think the narrator clever, resourceful, and no doubt optimistic; having endured such hardships and came through it all as he did.

The narrator was a very clever person. Throughout the story he always seemed to pull through. A good example would be when he managed to free his bonds and escape the swinging pendulum. Although this cleverness often helps him to escape his torment, it also speeds up the plot to the almost inevitable. As seen toward the end of the story, the narrator escapes and there is a mad rush of the tormenters to bring him to his final fate. In the end this is something that develops into a platform for his rescue.

Resourcefulness was certainly something the narrator had no lack of. Such instances as the manor in which he measured the wall and the way he cut his bonds were relevant. Without this resourcefulness of his he would have most likely fallen into the pit; or even worse, sliced in half by the traversing pendulum. His resourcefulness seems to help stall him for time, until the time of which he either dies or is rescued. However, while it was good in that sense it also acted as an indication to his torturers to turn up the torture. His resourcefulness is the sole thing that ensured his optimistic views.

The narrator was very optimistic in the way he did things. This trait strongly shows in his thoughts displayed to the reader. There are such instances as the plotting of his escape from the cold shadow of the pendulum and the hope that somehow he would not face the impending fiery walls. These instances show his will and hope that drive him toward the things he does thought the story. Without the

"the Pit and the Pendulum" Character Analysis from BookRags. (c)2021 BookRags, Inc. All rights reserved.