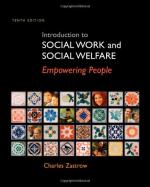 Get The Welfare State - Great Britain from Amazon.com
View the Study Pack

This student essay consists of approximately 14 pages of analysis of The Welfare State.

Summary: The Welfare state was set up in Britain to help the people gain a healther and better standard of living. The term applies to social programs pertaining to health, education, subsistence, pension and forms of social assistance
The Welfare State

In the years of 1945 to 1951 the Labour Government managed to set up a wide variety of Social Reforms. This soon became named the `Social Revolution.' Labour was lucky to rise to power with 393 seats in the House of Commons, although the Conservatives only gained 213 seats. The reason for such a high number of votes towards the Labour was due to the radical change wanted that affected everyone during thee Second World War. People no longer wanted to have the Conservatives in power, as the conservatives would have kept the things the same, the Labour Party opted for radical change, and the people responded by putting the Labour Party in control. Another thing that had also affected people's votes was the idea that many social classes had actually disappeared because of the war effort. Another reason for the Labour party to be heavily voted for...

More summaries and resources for teaching or studying Welfare.