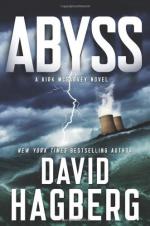 Get The Abyss from Amazon.com
View the Study Pack

This student essay consists of approximately 5 pages of analysis of The Abyss.

Summary: Although the Abyss of the deep ocieans may appear to be a cold, dark, lifeless world, it has been for scientists, a treasure trove of interesting creatures and organisms. More new species have been found in the Abyss in recent years, than from any other ecosystem on the planet, and is described as "the last frontier" for earth.
When people think of the ocean, they usually think of the clear, blue waters just

beyond the shores where creatures of every color and size dwell. The scientific name for

this area is the Pelagic zone, the area of the ocean where most of the species live.

However, there is another area, just below the Pelagic zone that is often forgot, that could

be the last great mystery that earth holds for humanity. It is the "Abyss", which includes

the ocean floor and the area of ocean where sunlight can not penetrate.

The history of humanity's knowledge of the Abyss may begin as soon as 1818,

the North Atlantic. He was able to hook a number of strange looking worms and a sea

More summaries and resources for teaching or studying Ocean.

The Abyss from BookRags. (c)2021 BookRags, Inc. All rights reserved.