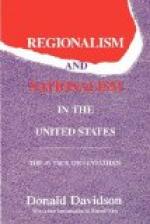 Get American Nationalism After the War of 1812 from Amazon.com
View the Study Pack

This student essay consists of approximately 2 pages of analysis of American Nationalism After the War of 1812.

American Nationalism After the War of 1812

Summary: This essay describes the burst of American nationalism that followed the war of 1812. The causes of phenomenon are explained, as well the way the sentiment spread through American literature.
The outcome of the War of 1812 was surprising and unexpected. The British were dominating most of the war, such as the burning of Washington, but in a surprise upset in the battle of New Orleans the over confident British were destroyed. This upset brought around the Treaty of Ghent, which led to an armistice between the two countries. Having beaten the British again, the American people developed a strong sense of nationalism.

Feelings of nationalism were also able to spread through American literature. Writers such as Washington Irving and James Fenimore Cooper wrote books that helped promote American nationalism. Nationalism was further heightening by a plan that Henry Clay came up with. This plan known as the American System, started with building a strong banking system, then moved on the implementing a protective tariff, which caused eastern manufacturing to grow. The final part of the American system was transportation. The networks of roads and canals allowed supplies to move all over the country. Supplies were moved from North to South to East to West. This form of transport kept each area dependant on the other areas for supplies, and therefore kept them economically and politically connected. This strengthened nationalism even more because America was no longer split South, and North. It was a united country politically and economically tied.

More summaries and resources for teaching or studying Nationalism in the United States.

American Nationalism After the War of 1812 from BookRags. (c)2022 BookRags, Inc. All rights reserved.