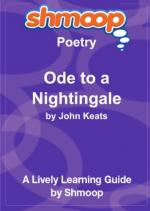 Get Ode to a Nightingale- John Keats from Amazon.com
View the Study Pack

Ode to a Nightingale Essay | Essay

This student essay consists of approximately 4 pages of analysis of Ode to a Nightingale- John Keats.

Ode to a Nightingale- John Keats

Summary: Much like Coleridge, Keats harnesses the power of his imagination and uses it to escape the confines of his prison like reality, the difference being Coleridge comes out of his journey with a new way of thinking and a positive outlook on his current situation, where as Keats is returned to his original state, disoriented and unsure if he is sleeping or awake.
Title- Ode to a nightingale

. He expresses his sorrows and obsession with death and; "for many a time

I have been half in love with easeful Death,"

. He conveys the imaginative journey he experienced whilst away with the nightingale. It is pure escapism giving Keats a break from the reality of his illness as he traveled on the song of the bird.

. Entertainment through the continued use of descriptive and imagery e.g. "The coming musk-rose, full of dewy wine" Keats is describing the scents he experiences whilst on his adventure.

The purpose for the text being published would have been to generate income and promote Keats as...

More summaries and resources for teaching or studying Ode to a Nightingale.