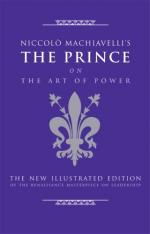 Get Machiavelli: the Philosophy behind a Renaissance Man from Amazon.com
View the Study Pack

This student essay consists of approximately 4 pages of analysis of Machiavelli.

Machiavelli: the Philosophy behind a Renaissance Man

Summary: Niccolo Machiavelli gained a certain notoriety through a misinterpretation of history. Few realize that his writings were by one of Italy's last true patriots, and with his brilliant humanistic and secular ideals he hoped to politically unite Italy. The ideas of the humanist, author, statesman, and Renaissance man will always be placed among the most influential documents on political theory. Machiavelli's most famous work The Prince, is by far his most interesting piece. The book was written as a guide to ruling, but explored a more infamous aspect of the leadership role.
Machiavelli: The Philosophy Behind a Renaissance Man

At the turn of the fifteenth century, Europe took a drastic change of culture and appearance that would change history. The Renaissance, or rebirth, of Europe from the Dark Ages which had overturned the beauty and slender of the magnificent Greco-Roman vestige. This was a time of both individual excellence, and cultural growth. Philosophical concepts such as Humanism emerged to dominate attitudes and beliefs for centuries to come. Among the humanists were exceptional personalities such as Niccolo Machiavelli. Machiavelli lead a eventful life during these exciting times. Machiavelli's accomplishments are few in number, but there tremendous power and influence would change the direction of much political thought for years.

To completely understand the ideas of Machiavelli, one must first examine the basis of Humanism. Humanism was the most popular form of philosophical thought of the time. Among the humanists were some...

More summaries and resources for teaching or studying Niccol Machiavelli.

Machiavelli: the Philosophy behind a Renaissance Man from BookRags. (c)2021 BookRags, Inc. All rights reserved.