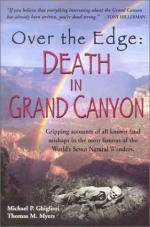 Get Grand Canyon from Amazon.com
View the Study Pack

This student essay consists of approximately 1 page of analysis of Grand Canyon.

It formed by water, dirt, and mud carving it. They all gathered up and made a massive hole in the ground which grew. It got bigger and longer and then it just stopped. It stopped about 1 to 5 million years ago. They say the water, dirt, and mud came from the Colorado River. It pushed it hard and made huge carvings which took millions or even billions of years to form.

A cool thing about the Grand Canyon is that the sides of it often look like stairs. Thats how you would easily climb it if you where a good climber. Another cool thing about it is that all of it wasnt accually carved and made by the Colorado River. A part of it was carved out by the Grand Canyon National Park Enlargement Act, passed on January 3, 1975. Marble Canyon on the west and Grand Canyon National Monument on the east were added bringing protection to the entire area between Glen Canyon to Lake Mead.

More summaries and resources for teaching or studying Grand Canyon.