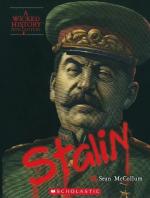 Get Why Stalin, Not Trotsky, Became Lenin's Successor from Amazon.com
View the Study Pack

This student essay consists of approximately 3 pages of analysis of Why Stalin, Not Trotsky, Became Lenin's Successor.

Summary: This essay explores why Stalin became Lenin's successor instead of Trotsky, despite Trotsky's accomplishments. Reasons cited include the perception that he was weaker than Stalin, and that the Russians feared he was too ambitious. The discussion describes and compares the accomplishments of the two leaders.
Stalin emerged as Lenin's successor for many different reasons. Stalin was a vicious man with many strengths which helped him gain leadership. He was the quiet one in the Bolshevik party, but appeared as Lenin's loyal colleague after his death in 1924.

Stalin took on the job of General Secretary and that put him in control of the Bolshevik party. With his position, he promoted his friends and those who supported him and he demoted his opposition and gave them boring jobs. This helped Stalin gain power because he got to know the party well. gained a lot of support and could easily infiltrate his influence on the party.

Trotsky believed in the idea of world wide communism. He thought that other countries would like the idea of communism and that there would be revolutions all over the world. This was unpopular among the Russian citizens as they believed...

More summaries and resources for teaching or studying Joseph Stalin.