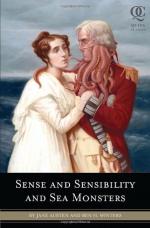 Get The Settings for Sense and Sensibility from Amazon.com
View the Study Pack
View the Lesson Plans
Related Topics
Lady Susan

Jane Austen
This student essay consists of approximately 2 pages of analysis of The Settings for Sense and Sensibility.

The Settings for Sense and Sensibility

Norland is considered an old and handsome property, but its worth seems to decrease when Mrs Dashwood and her daughters leave. John Dashwood talks about improving the place but the ida of improvement is to pull down the walnut trees to build a greenhouse. Norland represents the loss of traditional values as people who have money but little taste take over stately homes.

Barton Cottage is a happy home simply because the Dashwoods live there in peace and contentment. Even Willoughby is charmed by the place and tells Mrs.Dashwood not to change anything. Barton Cottage shows people that you do not need wealth or luxury to be happy

Barton Park, the home of Sir John and his wife 'is large and handsome' A lot of entertaining takes place in Barton Park. Lady Middleton makes sure the house is run elegantly. A lot of social gatherings are held and Jane Austen suggests this is how young girls get to meet their future husbands. In fact, Marianne met Colonel Brandon here. At the end of the novel it is suggested that too Margaret will find her parther in Barton.

Cleveland is the Palmer's home. This is another large and comfortable home with large grounds.There is even a Grecian Temle which Marianne likes. The grounds are also slightly wild and this appeals to Marianne who is able to indulge in her exaggerated sadness.

The London homes that are mentioned are the homes of Mrs.Jennings and John Dashwood. It is interesting that Elinor and Marrianne are not as happy in London as they were when they were in the country. Country homes in Austen's novels are often described in more positive terms than London homes which seem to be the setting for personal sorrow and tragedy

The various settings make the novel more interesting and provide futher insights into thelives of the characters.

The Settings for Sense and Sensibility from BookRags. (c)2021 BookRags, Inc. All rights reserved.