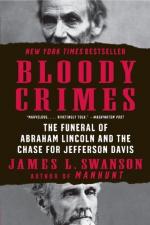 Jefferson Davis's "most earnest desire" was for a peaceful succession. He believed that independence must be pursued, but "appeal to arms" must be the last solution. He wanted "little rivalry", which would call for "good-will and kind offices on both parts." He knew that the Confederacy, an agricultural society, needed the Union, a manufacturing society, to succeed, and vice versa. Prosperity was in fact the goal of the Confederacy, and Jefferson Davis planned to achieve this as peaceably as possible.

More summaries and resources for teaching or studying Jefferson Davis.