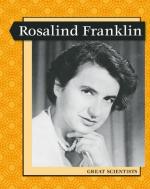 Get Rosalind Franklin from Amazon.com
View the Study Pack

This student essay consists of approximately 2 pages of analysis of Rosalind Franklin.

Summary: A brief summary of molecular biologist Rosalind Franklin and her important role in the discovery of DNA. The summary is based on the documentary movie "The Secret of Photo 51."
Here is a repot on Rosalind Franklin from the movie "The Secret of Photo 51." I will talk about her life including things like when she was born, her schooling, wealth, intelligence, math skills, achievements, and when she died, I will also talk about her work like discovery of DNA and the two forms of DNA. I will also talk about her conflicts when competing in the race to discovery DNA.

Rosalind Franklin was a very intelligent girl from young on. She was born in 1920 to a wealthy family whose parents were bankers. Rosalind was very into school and received very high grades. On her spare time she would practice her arithmetic and figure out complex equations. After school she received a scholarship and went to college at Cambridge University. She played a very large part in discovery DNA and because of her we have been able to cure many illnesses. She died on April 16, 1958. She received the Nobel Prize award for her work in the discovery of DNA.

Her work was a scientist. She spent most of her life trying to discover DNA. She was the first one to receive Photo 51. She tried to make a model of DNA but was no were close to being correct. She also discovered that DNA is made of a double helix. Unfortunately because of her discoveries she did not win the race to find DNA, because others steal Photo51 and prove their case before she is able to.

Some conflicts in her life were the fact that in trying to discover DNA she was in a race with two other scientists by the names of Watson and Crick. Watson and Crick stole information from her including Photo 51, and the double helix conclusion. When they stole the photo they had enough proof to prove the structure of DNA and they received credit for it. Not until years after Rosalind's death did she receive credit for her discovery.

In conclusion Rosalind was a very intelligent lady and contributed to most of the discovery of DNA. She should have received credit for her work because without her Watson and Crick would not have beaten her in the race. Al-in-al she was a very smart person and contributed to the better knowledge of life and in my mind, she really won the race.

More summaries and resources for teaching or studying Rosalind Franklin.