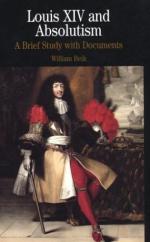 Get European Absolutism during the Eighteenth Century from Amazon.com
View the Study Pack

This student essay consists of approximately 4 pages of analysis of European Absolutism during the Eighteenth Century.

European Absolutism during the Eighteenth Century

Summary: Absolutism is the practice in which a single monarch rules his/her country, whether by divine right or by social contract. This analysis of the theory and practice of absolutism in both Eastern and Western Europe in the eighteenth century shows that while Western European monarchs enjoyed greater success because of their collaboration with the people, Eastern European monarchs ruled more for themselves and thus struggled with their citizens in terms of finding peace.

Q: Analyze, describe and evaluate the theory and practice of absolutism in eastern Europe and Western Europe.

Many countries were ruled in absolutism in Europe during the eighteenth and nineteenth centuries. Absolutism is the government in which absolute monarchy is embedded in the person of the monarch. There are two theories of absolutism which are divine right and social contract. Rule by divine right was the theory that God had established the kings as the rulers on earth. Social contract, which was proposed by Thomas Hobbes, states that sovereignty is ultimately derived from the people, who transfer it to the monarchy by implicit contract. He believe that people were all given a set of natural rights. Absolutism has many characteristics that illustrate the function of the government. The monarch usually eliminated competing jurisdictions especially that of nobles and clergy. The monarch usually has his or her own standing...

More summaries and resources for teaching or studying Autocracy.