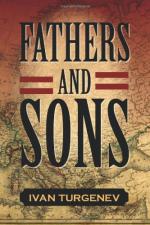 Get Analysis of Bazarov in Fathers and Sons from Amazon.com
View the Study Pack
View the Lesson Plans

Ivan Turgenev
This student essay consists of approximately 2 pages of analysis of Analysis of Bazarov in Fathers and Sons.

Analysis of Bazarov in Fathers and Sons

Summary: An analysis of the character Bazarov from Turgenev's novel Fathers and Sons. Representing one of the "Sons" in revolt against their fathers during the 1860s, Bazarov rejects liberal reformism, any attempt to idealize the peasantry, divine faith, and all social customs. His encounter with the emotion of love, however, marks the beginning of his tragic end.
Critical analysis of Bazarov

Bazarov is a model of the "new man" of the 1860s. He is a representative of the sons mentioned in the title. These sons are in revolt against the principals of their fathers, the "men of the forties." This projection of the "new man" embodies the views of nihilism. This is the rejection of any values created by society. Bazarov rejects liberal reformism, any attempt to idealize the peasantry, divine faith, and all social customs. He attempts to be totally independent and live a life based on science. His nihilism breaks down after he encounters the emotion of love, which he had stipulated did not exist. Turgenev sensitively alerts us to the changes in Bazarov, by beginning with external changes. ."..unprecedented perturbation: he was easily irritated, reluctant to talk, he gazed around angrily, and couldn't sit still in one place, as though he were...

More summaries and resources for teaching or studying Fathers and Sons.

Analysis of Bazarov in Fathers and Sons from BookRags. (c)2021 BookRags, Inc. All rights reserved.