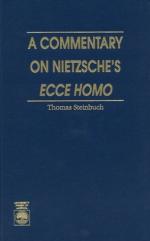 Get Nietzsche's "Ecce Homo" from Amazon.com
View the Study Pack

This student essay consists of approximately 2 pages of analysis of Nietzsche's "Ecce Homo".

Summary: German philosopher Friedrich Nietzsche attempts to validate his whole being in "Ecco Homo." He writes about the boldness required to be an "immoralist" and how his ideas are ahead of the time.
The book Ecce Homo seems to be an account of Nietzsche establishing a validation of his whole being. This whole book is an opportunity for him to critique himself, and he finds himself more than superb. ."..I have been told how getting used to my writings spoils ones taste. One simply can no longer endure other books, least of all philosophical works" (719). This writing is his way of not becoming perpetually problematic. He wants to make very clear that he is the pivot point around which all change will come and that his goal is to have all things established and idolized ruined. "Whoever uncovers morality also uncovers the disvalue of all values that are and have been believed: he no longer sees anything venerable in the most venerated..." (790). The review of his various works is a way to make sure that the reader cannot accuse him of being something he is not and therefore test the reader's true understanding of his nature. His ideal reader would be one that was strong enough to understand the boldness of an immoralist.

He also has a continuing theme of his work being premature. This theme comes from his strong ego believing that the reason that he is not widely read is because his ideas are too revolutionary to be understood. "But it would contradict my character entirely if I expected ears and hands for my truths today: that today one doesn't hear me and doesn't accept my ideas is not only understandable, it seems right to me" (715). His continual focus on the stupidity of Germans becomes irritating after a while. "To think German, to feel German-I can do anything, but not that" (719).

His treatment of the emancipated woman explained most clearly to me the kind of thought process that he used when writing. His prose, while seemingly a logical deduction about the nature of women and the redeeming value of children, would only have made sense to a man in the 19th century and is therefore not revolutionary. However, he does mention the indisputable status of women at the top of nature. His point seems to be that emancipation is unnatural. ."..the emancipated are anarchists in the world of the eternally feminine" (723). Ecce Homo seems to be Nietzsche's reach for perfection, a revision and explanation of works he already found masterful.

More summaries and resources for teaching or studying Ecce Homo.