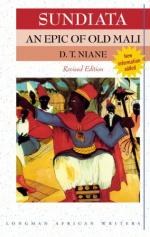 Get Sassuma Berete and Sogolon Kedhou in "Sundiata" from Amazon.com
View the Study Pack
View the Lesson Plans

Djeli Mamoudou Kouyate
This student essay consists of approximately 4 pages of analysis of Sassuma Berete and Sogolon Kedhou in "Sundiata".

Summary: The epic "Sundiata" depicts Sogolon Kendjou and Sassouma Berete in direct contrast, as Sogolon is portrayed as a good mother while her counterpart Sassouma is portrayed as an evil mother. Both queens wanted the best for their sons, but the differences in their characters and methods were so different that it influenced not only Sogolon's son Sundiata and Sassouma's son Dankaran, but all of the king's children.
Mothers play a very influential role in a young mans life. Even though Sogolon Kedjhou and Sassouma Berete both had an impact on there son's life, their character traits were at different ends of the maternal spectrum. Despite minuscule similarities Sogolon Kendjou and Sassouma Berete were depicted in direct contrast in the epic Sundiata.

When comparing the two Sogolon Kendjou and Sassouma Berete both did what they thought would help to get their son's to become king. Sogolon knew everything that Sassouma was capable of doing to hurt her family, so she came up with the idea to leave the kingdom. Soglon said, "Lets us leave my son" (113). She thought this would be the best thing to do for all her children so she could keep them alive. "Despairing of ever injuring you, Sassouma will aim her blows at your brother or sister"(115). Although it was Sundiata's destiny...