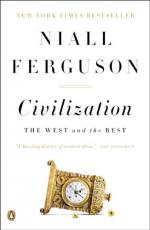 Get Decline of Rivervalley Civilizations from Amazon.com
View the Study Pack

Niall Ferguson
This student essay consists of approximately 2 pages of analysis of Decline of Rivervalley Civilizations.

Summary: The Decline of Ancient Mediterrean, Chinese, and Indian civilizations.
The Decline and fall of the Mediterranean and Chinese civilizations was a result of population decrease, weak government, a frail economy, and invasion. A combination of these causes sparked the slow decline of these once great empires. Unlike that of China, the decline of Rome was much more upsetting having a much larger impact on the surrounding world.

Decrease in population made it more difficult to have a strong military. The army that was already intact was demanding payment which greatly weakened the budget of Rome. Collecting taxes became harder thus causes the economy to decline. This inevitably made it easy for the Germanic tribes to invade the Mediterranean. Constantine and Diocletian slowed down the rate of decline in Rome by allowing Christianity, trying to improve tax collection, and the creation of a second capitol in Constantinople. This only sped up the rate of decline in the western half of the empire, but strengthening the eastern half. The only surviving portion of the empire was now known as the Byzantine Empire with its capitol Constantinople.

In China a weakened central government made it easy for Hun invasion. Overtaxing peasants caused social strife therefore when invasion occurred the peoples of Chine subjugated themselves under to rule. Confucianism decline, allowing Daoism to gain new grounds led by a group known as the Yellow Turbans who spoke of a golden age, this however only sped up the rate of decline. The Sui dynasty lessened the decline shortly, followed by the Tang dynasty.

Differing from Rome, there was no major disruption of society. Both civilizations were invading by central Asian groups. Towards the end of their decline, emperors and dynasties tried to revive the societies. This temporarily lessened decline but eventually did not last. Overtaxing of peasants in both societies caused for uprisings which weakened the economy. Lesser armies made it simple for the Huns to invade.

More summaries and resources for teaching or studying Civilization.