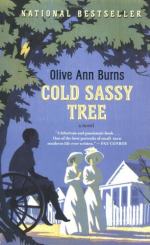 Get Will Tweedy and Rucker Blakeslee Similarities from Amazon.com
View the Study Pack
View the Lesson Plans

Olive Ann Burns
This student essay consists of approximately 2 pages of analysis of Will Tweedy and Rucker Blakeslee Similarities.

Will Tweedy and Rucker Blakeslee Similarities

Summary: A comparison of Will Tweedy and and his grandfather Rucker Blakeslee from the book Cold Sassy Tree. In spite of their age difference, the two men are similar in terms of their appearance, personalities, and relationships with women.

Cold Sassy Tree is an incredible story about a young man named Will Tweedy and his grandfather Rucker Blakeslee. In 1906, fourteen-year-old Will is just starting to realize what it means to be a man and all the responsibility that comes along with growing up. While his grandpa is an elderly man, as the novel progresses he slowly becomes a man of youth in spirit once again. In many ways, Will Tweedy and Rucker Blakeslee are the same man but at opposite ends of life's spectrum.

The most obvious way that Will and his grandfather are alike is in their appearance. Will is the mirror image of Rucker, especially after Rucker's wife, Love, gives him a haircut and shaves his beard. She says, "You and him-I mean you and he-you look a lot alike" (121). In spite of the 40-year age difference, their similar appearance is even more noticeable than before.

Along with their looks, Will and Rucker also share a similar spirited temperament. Will and Rucker seem to be in the middle of many fights during their school years. At Rucker's funeral, Will overhears a group of men talking about his grandpa's fighting ability. "He was the best knuckle-knocker in school..." (387). He must have been a very skilled fighter if men are still talking about his ability to fight even after all these years.

In many ways Rucker and Will are the same man in spite of their physical age difference. The two men share many similarities in their appearance, personality and relationships with women.