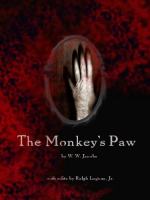 Get "The Monkey's Paw": Fate or Force? from Amazon.com
View the Study Pack
View the Lesson Plans

W. W. Jacobs
This student essay consists of approximately 5 pages of analysis of "The Monkey's Paw".

"The Monkey's Paw": Fate or Force?

Summary: W.W. Jacobs' short story "The Monkey's Paw" addresses the consequences of interfering with fate, which most people are not prepared to handle. Significant questions covered in this analysis involve the nature of the external force, how the characters handle that force, and what their handling of that force says about the characters.
Fate or Force"

From the works of W.W. Jacobs: The Monkey's Paw

"The Monkey's Paw", a short story by W.W. Jacobs, is a twisted macabre tale dealing with the consequences of interfering with fate. The saying "be careful what you wish for, you may receive it" is the premise of the story. The nature of the external force is the monkey's paw ability to arouse curiosity and evoke temptation. The White's used humor mixed with frivolousness to deal with the fixation of the monkey's paw. This attitude towards the powers of the paw portrayed the Whites as a family who enjoyed joking with one another and did not take anything out of the ordinary too serious. It also shows that they lacked an understanding of the ramifications of their actions. The author used symbolism in the story to advise the reader of ill fate. The chess...

More summaries and resources for teaching or studying The Monkey's Paw.