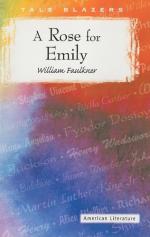 Get "A Rose for Emily": The Narrator's Psyche from Amazon.com
View the Study Pack

William Faulkner
This student essay consists of approximately 2 pages of analysis of &quot;A Rose for Emily&quot;.

"A Rose for Emily": The Narrator's Psyche

Summary: William Faulkner's use of collective voice for the narrator of his short story "A Rose for Emily" enables the town's citizens to express what they see and what they believe regarding Miss Emily. The town not only carries the story of the progress of Emily's life, but also judges her actions, both actual and perceived, during that progression. The opinions expressed by this "collective narrator" reveal the narrator's psyche, or the values of the town, as its character develops over the story just as a person's character would.
William Faulkner's short story "A Rose for Emily", is narrated in a unique point of view; rather than speaking in a single voice, the narrator uses a collective voice of "we", as though there are multiple observers. The purpose of using "we" is to speak for the town's citizens as the narrator to create a sense of intimacy between the reader and the story. The town carries the story of the progress of Emily's life and also judges her actions (perceived or actual) much like a chorus in a Greek tragedy.

The short story has a theme of corruption and evil. The opionions and comments reveal the psyche of the collective narrator, or the values of the town. The narrator's position is occasionally ambivalent, making judgements both for and against Miss Emily. The narrator judges the main character, Miss Emily as a fallen "monument", but simultaneously as a member of the upper class of society and therefore above criticism and in a class outside of the ordinary townspeople.

The narrator is very affectionate in the way he speaks about Emily. We can examine the narrator's values when he respects Emily for using her position is society to evade the law when she goes to buy posion and does not give a reason of her intent. In general the narrator is sympathetic to Miss Emily and admires her ability to use her perceived standing in society to "vanquish" the members of the town council. We can also question the narrator's motive in why he felt a need to share this story with us, perhaps wanting us to pity the elderly peopple whose values and status are no longer widely accepted.

"A Rose for Emily": The Narrator's Psyche from BookRags. (c)2022 BookRags, Inc. All rights reserved.