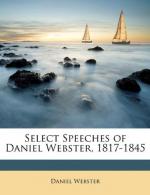 Get Daniel Webster from Amazon.com
View the Study Pack

This student essay consists of approximately 2 pages of analysis of Daniel Webster.

Summary: A short biography of 19th-century statesman Daniel Webster. A U.S. representative and senator from Massachusetts as well as U.S. Secretary of State, Webster was noted for his oratory, integrity, and commitment to preserving the Union in the decade preceding the Civil War.
Daniel Webster was a US representative, senator, and an orator. He was born in Salisbury, New Hampshire. He studied at Dartmouth College and taught at schools while studying law. He became a lawyer in 1805; he gained a local reputation as an orator and came to wider notice as an opponent of the USA undertaking the War of 1812. He was then elected to the US House of Representatives, where he became a leader in opposing the policies of the Democratic-Republication administration. He then moved to Boston to pursue his law career, including appearances before the US Supreme Court. He was then elected again to the US House of Representatives, but now from Massachusetts he was a strong supporter of John Quincy Adams.

In 1827 he was elected to the US Senate, and he was a supporter of the National Bank, a protectionist, and a champion of the nascent New England woolen cloth industry, but he was against the annexation of Texas and the Mexican war. Although he was opposed to slavery, abolitionists denounced him for his support of compromises on sectional issues involving the slavery issue. He was pro-union, and he denounced the nullification arguments by states' rights advocates in a famous debate in 1830. As secretary of state from 1841 till 1843 he negotiated treaties settling a border dispute with Canada, and establishing relations with Chicago. He was re-elected to the US Senate, where he delivered his famous speech on March 7, 1850 supporting the Compromise of 1850.

This led to him getting attacked by the anti-slavery forces, but he left the Senate to serve again as secretary of state in 1850. He died in that office, greatly admired for his orating, integrity, and commitment to preserving the union, but never having obtained the broad support that would have gained him the presidency he wanted. He died in 1852.

More summaries and resources for teaching or studying Daniel Webster.