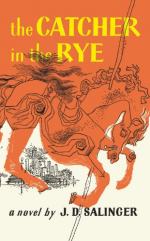 Get Comparison of Two Teenagers in Different Times from Amazon.com
View the Study Pack
View the Lesson Plans

J. D. Salinger
This student essay consists of approximately 2 pages of analysis of Comparison of Two Teenagers in Different Times.

Holden the main character from the book The Catcher in the Rye and Charlie the main character from the book The Perks of Being a Wallflower have many similarities and many differences. Even through they live in two different time periods they both go through some of the same problem and issues but on the other hand there are some issues that one or the other experiences and the other one doesn't.

First Charlie is around the age of 15-16 in the book. He is very smart but often very confused by many things and does not have very good social skills. He is a middle class student who goes to public schools and is very awkward looking, not the most popular kid in school. He hangs out with kids that are outsiders of society.

Also Charlie can be a mature person at times when he wants to be but most of the time he usually is very immature for his age. He likes to be very independent and mellow around people. He is at times experienced on some issues and gets more experienced by hanging out with the kids that he does hang out with. He does not like to get involved with social issues but more likes to be a social obverse.

Holden on the other hand is around the age of 16-17 in the book. Holden is extremely rich and goes to school in a boarding school for boys. He is very child like and scared most of the time. His attitude on life is very immature but at times he can be mature. He is independent at times and loves the social life and loves to party a lot. Holden is depressed a lot and usually let down by most things.

In conclusion Holden from the book The Catcher in the Rye and Charlie from the book The Perks of being a Wallflower are very similar in many ways and very different in many ways. Even through Holden lived in the 40's and 50's and Charlie is living in the 90's they both go through the same teen issues. But they do go through some different issues as well.