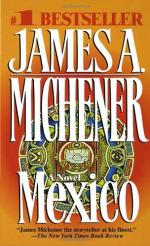 Get Mexico from Amazon.com
View the Study Pack

James Michener
This student essay consists of approximately 2 pages of analysis of Mexico.

Summary: A basic overview of the country of Mexico, including geography, climate, environmental concerns, population, history, and transportation.
Mexico

Mexico is located in the middle of America, bordering the Caribbean Sea and the gulf of Mexico between Belize and the US and bordering the North Pacific Ocean, between Guatemala and the US. The total area equals to 1,972,550 sq km; land taking up 1,923040 sq km and water taking up 49,510 sq km. Comparative to Texas, Mexico is around 3 times bigger.

Mexico has a climate that varies from tropical to desert with it terrain being high, rugged mountains and low coastal plains. Mexico's lowest point is Laguna Salada that is -10m and its highest point is volcan Pico de Orizaba that is 5,700m. Mexico's main land resources are petroleum, silver, copper, gold, lead, zinc, natural gas, and timber.

Mexico, like all other place sin the world, has natural hazards. Their natural hazards are tsunamis along the pacific coast, volcanoes and destructive earthquakes in the centre and south, and hurricanes on the pacific, Gulf of Mexico and Caribbean coasts.

Mexico gained itself independence on 16 September 1810, making their national holiday being that date. The Mexican flag would be described as having three equal vertical bands of green (hoist side), white, and red; the coat of arms (an eagle perched on a cactus with a snake in its beak) is centered in the white band.

For more information on mexico head to www.answers.com/mexico

More summaries and resources for teaching or studying Mexico.