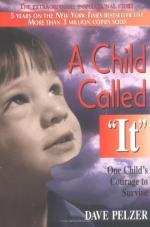 Get If I Were Dave in A Child Called It from Amazon.com
View the Study Pack
View the Lesson Plans

A Child Called It: One Child's Courage to Survive Essay | Essay

Dave Pelzer
This student essay consists of approximately 2 pages of analysis of If I Were Dave in A Child Called It.

If I Were Dave in A Child Called It

Summary: In the book A Child Called It by Dave Pelzer, Dave was abused by his mother violently; nevertheless, Dave took it, and he never thought about reporting it. If I were Dave, I would have reacted differently.
If you were a character in this novel, how might you act differently to change the outcome of the novel?

While I was reading A Child Called "It", I was confused by why Dave doesn't just report his abusive mother. He also had many chances to say it, like when the inspector came to investigate, when the teacher asked about the injuries, or when the nurse was questioning him. Although the final outcome of the story was a happy one, a lot of unfortunate events could have been avoided if Dave did some actions earlier.

If I were Dave, I would not listen to Mother giving me the commands like I was a slave. I might rebel since doing my commands gets me punishments anyways. I shouldn't have taken her blows as if I was just a lifeless dummy. I would fight back when she punishes me, and then telling Father how Mother punishes me. I definitely would have protected myself; least I could do is just run away from home. I would question why Mother's love is only for the other brothers, but not for me. I would try to ask her the reasons for her actions, and try to resolve any issues she has against me. I would also turn to Father for help. Maybe even encourage Father to speak up for us, and take legal actions.

If I couldn't change Mother by myself, I would seek help at school. I would tell my teacher about my Mother, instead of doing what my Mother tells me to say, which is making up reasons for my injuries. When the inspector came, I should have known that Mother's sudden change is just temporally.

There are a lot of things Dave could have done, but he never did them. Maybe it's due to his mother's threats. But if I were Dave, I would not feel threatened. I would know that Father, teachers, and the law would be on my side.

If I Were Dave in A Child Called It from BookRags. (c)2022 BookRags, Inc. All rights reserved.