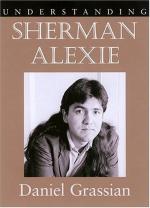 Get Sherman Alexie's Subtle Sarcasm from Amazon.com
View the Study Pack
Related Topics
War Dances
You Don't Have to Say You Love Me
This Is What It Means to Say Phoenix, Arizona
Happy Trails
Clean, Cleaner, Cleanest

Summary: Sherman Alexie's novels examine the relationships between whites and American Indians. He uses subtle sarcasm and sly humor to make his points about racism and the mistreatment of American Indians, such as setting "The Lone Ranger" and "Tonto" against each other to dispel their Hollywood hero myths.
Sherman Alexie illustrates a subtle sarcasm that is very consistent among his stories. He conveys many of the current social issues that seem to be constant among those of Indian heritage. His main characters all have very similar characteristics: very lay back and socially conscious. An important characteristic that his characters share is a sense of wit and cynicism which helps conveys Alexie's ideals in many regards.

The first rhetorical device Alexie utilizes is his methophorical use of his titles. In the piece The Lone Ranger and Tonto Fistfight in Heaven he uses two characters from a movie that was very popular at the time. However he puts the two characters against each other despite them being allies in the movie. The Lone Ranger symbolizes the stereotypical attributes of white's ideal hero while Tonto symbolizes the Native Americans ideal hero. The fistfight in heaven could possibly symbolize the...

More summaries and resources for teaching or studying Sherman Alexie.