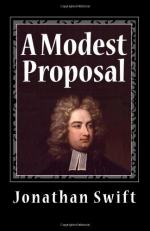 Get "A Modest Proposal" by Jonathan Swift from Amazon.com
View the Study Pack

Jonathan Swift
This student essay consists of approximately 6 pages of analysis of "A Modest Proposal" by Jonathan Swift.

"A Modest Proposal" by Jonathan Swift

Summary: An analysis of Jonathan Swift's essay "A Modest Proposal," a satire-laden piece in which Swift addresses the terrible living conditions that existed in Ireland during the eighteenth century. As is the case with any well-written satire, Swift created and implemented a shocking revelation and used a serious, detached tone to make it seem real.
A Truly Unmodest Proposal

Satire is the use of wit, especially sarcasm, irony, and ridicule to criticize faults. Arguably the most renowned author of satire is Jonathan Swift, chiefly known for his novel Gulliver's Travels, he also wrote numerous other pieces of literature, many concerning the politics of Ireland. His essay A Modest Proposal also brought him great fame. In it he proposed a vile solution for the problems of Ireland in the 1730's which he described as a plea "for preventing the children of poor people in Ireland from being a burden to their parents or country, and for making them beneficial to the public" (Intro; 1). He uses satire to address the terrible living conditions at the time in an indirect way. Through this paper Swift was able to intensify the problem and make it clear to everyone it was an imminent danger and had to be...