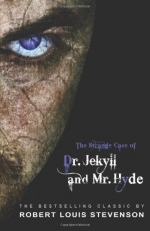 Get Jekyll, a Hypocrite? from Amazon.com
View the Study Pack
View the Lesson Plans

Robert Louis Stevenson
This student essay consists of approximately 2 pages of analysis of Jekyll, a Hypocrite?.

Summary: In the story Dr. Jekyll and Mr. Hyde, neither Jekyll nor Hyde was a hypocrite. A hypocrite acts honorably in public but the reverse in private; Jekyll always acted honorably, whereas Hyde acted in a completely opposite way. However, both Jekyll's and Hyde's extremes contained within the same person were used to remind the reader of hypocrisy and to portray a hypocritical society.
Jekyll is not a hypocrite and neither is Hyde, but together they are used to represent a hypocritical society. Jekyll and Hyde were separate individuals, each acting upon their own will. Hypocrites do act under their own will, but Hyde was solely controlled by himself, and soon Jekyll would not even be able to control his coming. Neither character was a hypocrite, but the idea that they portrayed was.

As Jekyll says, " `both sides of my were in dread earnest,' " he is right. Jekyll, in public and in private, acted as virtuously and honest as can be. Hyde also acted the same in public and in private, mean and rude. Poole, for example, observed this, " `Have I been twenty years in this man's house, to be deceived about his voice? No, sir; master's made away with... and who's in there instead of him... is a thing that cries to Heaven!' " Poole, one who would know every detail of Jekyll's personal life, notices that even when he's alone, Jekyll acts respectably, but when he becomes Hyde, it is very evident to Poole that there is a change. Poole also recognized, to its full extent, that Hyde was a completely different man.

A Hypocrite acts honorable in public, but the reverse in private. Jekyll, though, is honorable in both. While a hypocrite willingly decides when to not be honorable, Jekyll does not. He may have chosen to take the drug, but he never would have chosen to do what Hyde did, like run down a girl or kill Carew. Eventually, it became so extreme that he literally had no control of anything, not even Hyde's coming to be. "Before the smile was struck out of his face and succeeded by such abject terror and despair." This shows his complete loss of control (this being entirely in public) of Hyde and his appearance.

Jekyll and Hyde were separate characters who acted earnestly, whether good or bad, in public and private. Neither had control over the other and they were merely used to portray a hypocritical society.