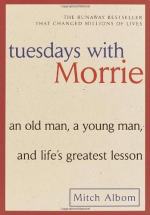 Get Tuesdays with Morrie from Amazon.com
View the Study Pack
View the Lesson Plans
Related Topics
The First Phone Call From Heaven
The Magic Strings of Frankie Presto
The Next Person You Meet in Heaven
Finding Chika

Mitch Albom
This student essay consists of approximately 2 pages of analysis of Tuesdays with Morrie.

Mitch used to be just like any other average person. He¡¦s ambitious for his work, and very involved materially. Although at the graduation, he told his professor, Morrie that they¡¦d keep in touch Mitch became too busy with his life, and forgot about his professor. It was after so many months, while Mitch was watching the news, he saw his dying professor. And that¡¦s when Mitch¡¦s greatest lesson starts.

Mitch decided to visit Morrie, every Tuesdays. Just like when Mitch was still Morris¡¦s student, they meet every Tuesdays for discussions. Now, Morrie would talk about life, and Mitch would ask questions and tape their conversation to keep their memories together.

Life is much more different when you are dying. You don¡¦t care about news as much, you give up on food you used to eat and activities you used to do. For Morrie, that would be swimming and dancing. All you want to do is the spend time with your family and share your newly acquired knowledge with as many people as you can. The way Morrie sees it; death isn¡¦t, as intimidating as it may seem, when you are able to see past the materialistic world.

As time progresses, Morrie¡¦s condition worsens. The fact that he¡¦s going to have to totally depend on another for his survival is one of his major concerns. He lost his struggle at the point where he needed someone to wipe his butt. Another thing he¡¦s afraid of is not being able to share his thoughts, when he couldn¡¦t even nod his heads anymore.

Tuesdays with Morrie is a book that¡¦ll teach the reader about the truth of the world we are living in. It¡¦ll halt us down from living our self-absorbed life and have a second thought about the way we are living.